The Supporters' Trust are delighted to announce that this 2015 exhibition will now have a permanent place in our club bar, Champion Hill.

2020 is one most of us would like to forget for obvious reasons, but what shouldn’t be ignored is the Black Lives Matter protests that have taken charge over the last year, including across the UK. The largely peaceful protests have pointed the spotlight at the injustice still facing our black brothers and sisters to this day, and it is something we shall continue to fight until we gain equality.

Back in 2015 the Dulwich Hamlet Supporters Trust teamed up with the Dulwich Hamlet Football Committee, the Hamlet Historian Jack McInroy, and Hugo and Ben from the Forward The Hamlet podcast to launch a special Dulwich Hamlet Black History Month Exhibition, featuring photography commemorating the amazing achievements of the past and present black players across the club’s 122 history. 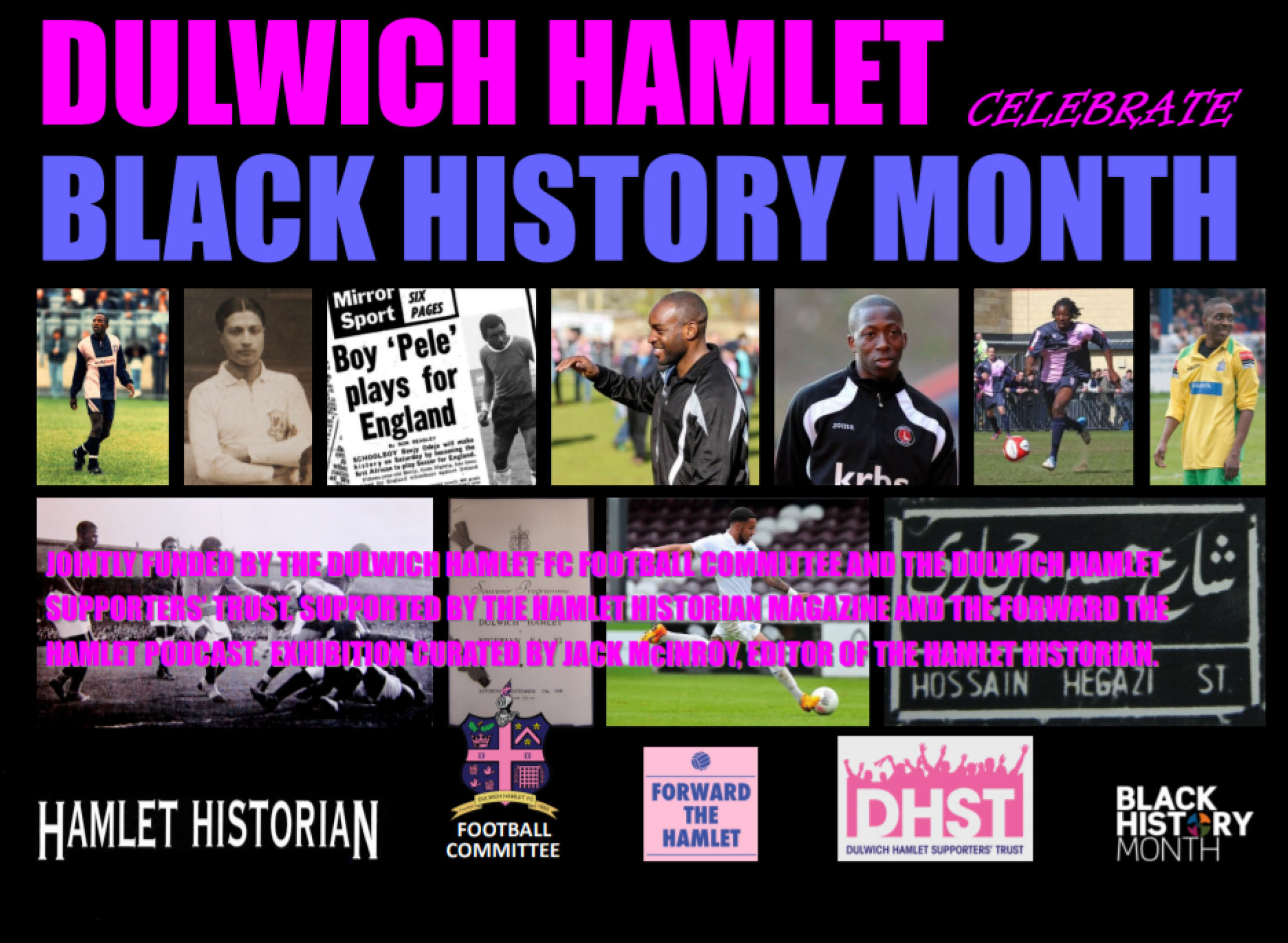 Launched at the Clubhouse by manager Gavin Rose in September 2015, the photographs remained on display throughout October of that year. Whilst Dulwich Hamlet Football Club and all entities associated with the Club (wholeheartedly including us at the Supporters' Trust) have always been vocal in their support to end racism, we felt a more permanent reminder of the Black Lives Matter and Black History Month was needed.

So we are delighted to announce that this 2015 exhibition will now have a permanent place in our Clubhouse.

The brilliant exhibit gives a poignant insight to the Club history and its strong links within the black community including pre-First World War Egyptian international Hussein Hegazi, Nigerian international Joseph Odegbami and the King of Camberwell himself Nyren Clunis.

“It is a small but significant first contribution to Black History Month from our club. There has been many great moments in our long history where black players have had an significant impact, and it’s right that we recognise this.”

Whilst COVID and the inconsistency in government plans for lower league football - and football in general - may have put visitors to the ground on hold, we have been busy at Champion Hill preparing for a possible return, and dreaming of the times when descending on The Hill after a couple in the EDT was our usual Saturday activity. We will feature this exhibition on our socials, and it will remain in the Clubhouse for supporters upon their return to the ground.

OTHER ARTICLES OF INTEREST:

Benjamin Odeje was the first black player to represent England back in 1971 and had two spells with Hamlet over the years. He revisited Champion Hill in 2016.

The Forward The Hamlet boys created a fantastic Home Disadvantage series, focused on Black Lives Matter movement and some of the players' experiences living as black people in London, and in the UK. An essential listen.

There are tons of insightful articles, views, and videos on the Black History Month UK here, including the effect of Windrush (something so closely intertwined with south London in particular).

You can relive the initial opening on the exhibition from 2015 in this Forward The Hamlet podcast episode.

In the borough over from Southwark, Lambeth are hosting a range of every for Black History Month 2020 including free online discussions and talks, exhibitions, and book recommendations.