The exhibition, to be held at Brick Brewery in Peckham, opens this Wednesday (1 August) with a launch party at 19:00 and runs until 6 September.

“Last season was a momentous and at times unbelievable season for Dulwich Hamlet – a true rollercoaster ride. There were highs and lows for everyone associated with the club and to have it end with a penalty shootout to secure promotion at last followed by celebrations on Promotion (née Goose Green) Roundabout was the icing on the cake.

Leading up to those last few weeks of the season, I started to think about some way to showcase my work and the club’s story in some way other than social media. I would one day like to make a photo-book, but I had no real idea how long that would take to get published. It was when I spoke with Sam (Mellish) that I realised he was thinking the same way as me. We shared a desire to put on an exhibition of our work to mark the club’s achievements. His photos from Dulwich Hamlet games last season are really beautiful, and offer a different perspective to mine, which are generally focused on the action on the pitch. 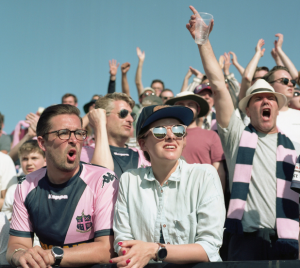 The Beautiful Game exhibition at Brick Brewery is a wonderful way to allow people to see our work in an exhibition environment and it will bring our photos to life. It’s also a brilliant way to keep Dulwich Hamlet in the minds of people in East Dulwich and Peckham. The club’s current situation means that it is not as visible in the local area (where we belong) as it has been in the past. This show will hopefully remind people that we’re still going, temporarily in a different location, and that we will be back! Ideally it will give people a nudge to go to watch some games next season at our temporary digs sharing Tooting & Mitcham’s ground.

It has been really difficult to whittle down my initial selection of images to the 20-or-so that will be on display, which is always a good problem to have. I’ve tried to select a good variety of photographs of players, management and fans.

I hope as many people as possible can get along to see The Beautiful Game between 1st August and 6th September. A big thank you goes to Brick Brewery for their cooperation and to Sam for his wisdom re: exhibiting our work and for sharing his awesome images!”

Brick Brewery is located in Arch 209, Blenheim Grove SE15 4QL and is open Tuesday – Friday from 5pm, Saturday and Sunday from 12noon.