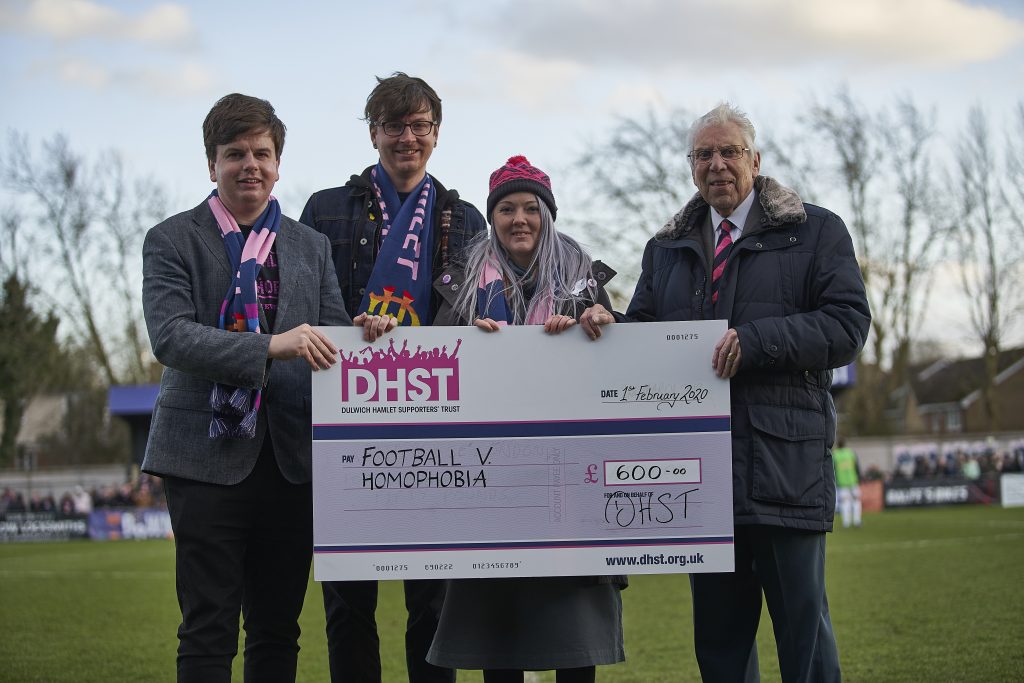 For the third year running the Supporters’ Trust have produced a limited edition Dulwich Hamlet Rainbow scarf to celebrate LGBT History Month. Alongside the scarves we have produced beanies and trucker caps that feature the club crest in the colours of the LGBT+ Rainbow Flag.

The scarves are priced £10, with beanies £10 and Truckers £12. A percentage of the profits from the scarf sale are being be split and donated to Football v Homophobia and AKT (Albert Kennedy Trust).

In addition, Club rainbow crest button pins (50 pence each) and Rainbow laces in stock. Only £3 per pair with all profits donated to Stonewall.

On Saturday 1 February, when the Men’s team played Chelmsford City at Champion Hill, the Trust presented a cheque of £600 to Brian Stokes from Football v Homophobia (FvH), FvH is an organisation that all football supporters in this country will be aware of.

FvH was originally conceived and launched by the Justin Campaign in 2010 to raise awareness of homophobia, that was prevalent in both grassroots and professional football. The Trust and football club have been supporting FvH for many years and it was great to meet Brian on the day.

Our second charity to receive profits from the rainbow scarf is AKT who were formed in Manchester in 1989 to offer support to LGBT+ young people facing homelessness or living in a hostile environment. It now has additional offices in London and Newcastle that also offers support in finding safe homes in addition to support with things like employment, education and training. We will be present a cheque of £600 to AKT representatives at the next home fixture in March.

On Thursday 27 February the Trust will be holding a quiz in the clubhouse on behalf of the club’s charity partners Redthread and Football Beyond Borders. The evening will begin at 7pm with the quiz scheduled to start at 7.30pm, entry is £5 per person with a maximum of 6 people in a team.

Enjoy the match today and we look forward to seeing you in the clubhouse later for post-match chat.