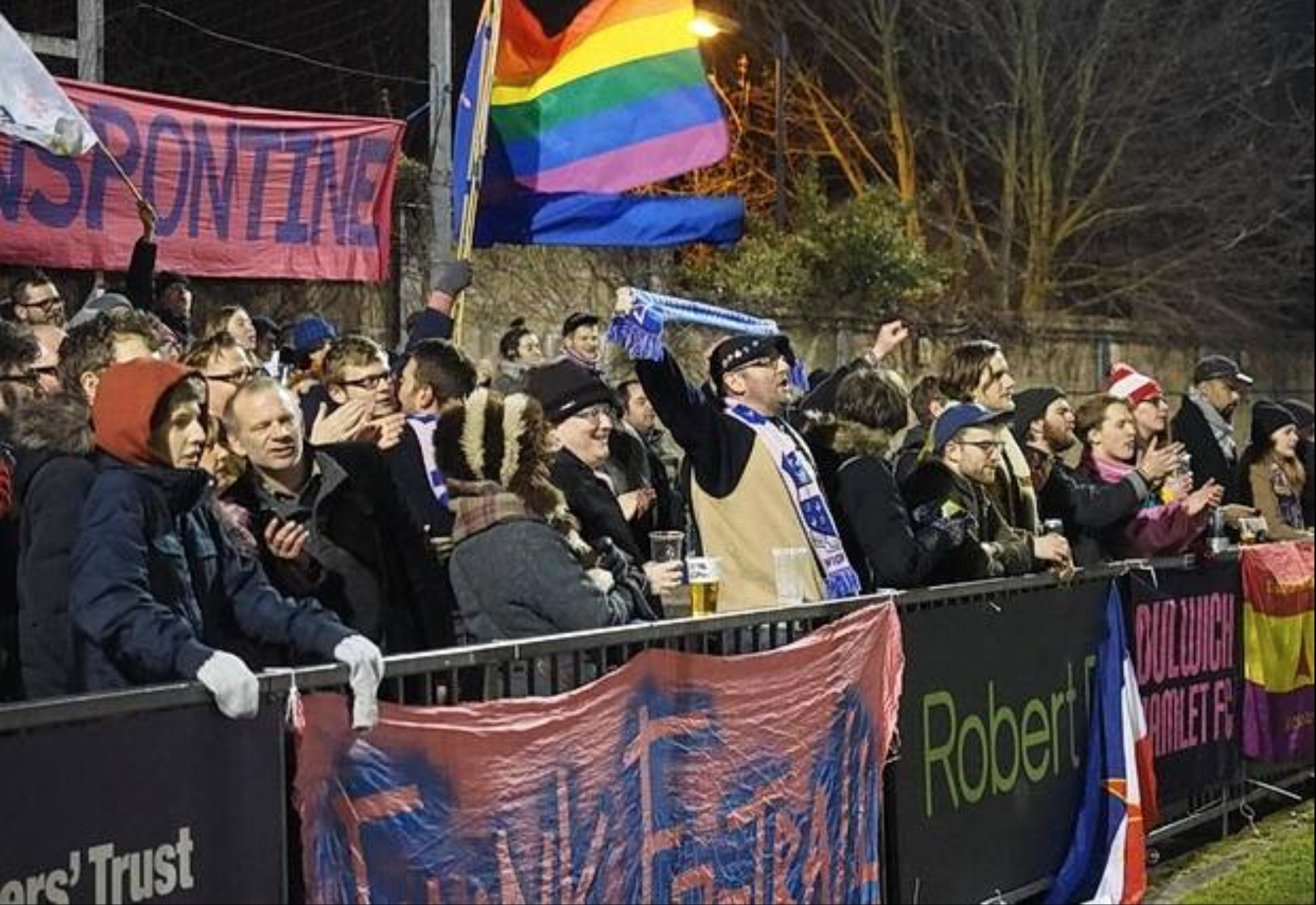 Six years ago, during LGBT History Month, Dulwich Hamlet invited Stonewall FC, the UK’s most successful all-gay football club, to Champion Hill to play a historic exhibition match. Today the SE22 terraces are silent; with this week’s National League announcement of the nullification of the men's season, and the ongoing pandemic keeping women's and academy games on pause, there’s no football at the Hill on the immediate horizon. So for 2021 LGBT History Month we instead look back at this ground-breaking friendly and its significance to LGBTQ+ fans of the game.

The match, the first of its kind, was the brainchild of the late, much-missed Mishi Morath, who was the club Community Liasion Officer at the time. Mishi approached Stonewall FC to help put the plan in motion, and the Trust built a campaign to promote it. Stonewall FC held the title of the Gay World Champions, and were the top-ranking gay football team in Britain at the time. The club was founded in 1991, and since 1995 have filled a trophy cabinet with 19 gold medals across the EuroGames, Gay Games and IGLFA World Cup.

The match took place on Wednesday 11 February 2015, and in promoting it, Trust board members distributed flyers to local and central London gay bars, seeking to grow the attendance beyond seasoned football fans and alight the curiosity of people in the LGBTQ+ community who might not have considered attending a football match. FourFourTwo published a warmly written story about the Trust's promotional efforts and the range of attitudes and experiences across the LGBTQ+ community with live football. (Sadly the article isn't on FourFourTwo's website but you can read it below.)

A commemorative programme was also created for the match, with all proceeds going to charity. With tickets modestly priced at £3, and the profits going to Stonewall’s charity of choice, the Elton John AIDS Foundation, it was an opportunity to go significantly beyond the well-meaning but limited rhetoric of anti-homophobia and anti-intolerance.

Dulwich Hamlet has been ahead of the curve over the years in promoting LGBTQ+ visibility in football. It’s evident as soon as you walk through the turnstiles and cross its iconic rainbow floor mural, and those inclusive values are carried through the fabric and activity of the club and the Trust. “We don’t care which team you play for” stickers adorn the walls, and pride merch and Stonewall rainbow laces are on sale all year round in the MegaContainer. The club has maintained annual Pride events at the club charity partnerships with the Gay Football Supporters’ Network and Football v Homophobia among others, while players across its teams support campaigns like the annual Rainbow Laces Day on the pitch.

The historic Hamlet / Stonewall match was a visible and progressive initiative that didn’t just acknowledge the LGBTQ+ community but celebrated them, and made a financial contribution to a charity that has done vital work for many in the community. In Mishi’s words, “We're not just saying 'We're against homophobia,' we're trying to welcome gay fans to Dulwich. That sums up the ethos of the club, we try to go that bit further.”

The match itself was a barnstormer. Stonewall, who sit in the Middlesex County Premier Division - and were a tier below that in 2015 - had a stiff job defending against the home side. Goalkeeper Mateusz Brzoska had his work cut out for him but was unable to tip the balance in a game played largely at the Stonewall end. A 369-strong crowd watched the home side net stake a 2-0 claim by half time, and the Hamlet came roaring out of the gate in the second half with two goals in quick succession by the 52nd minute. 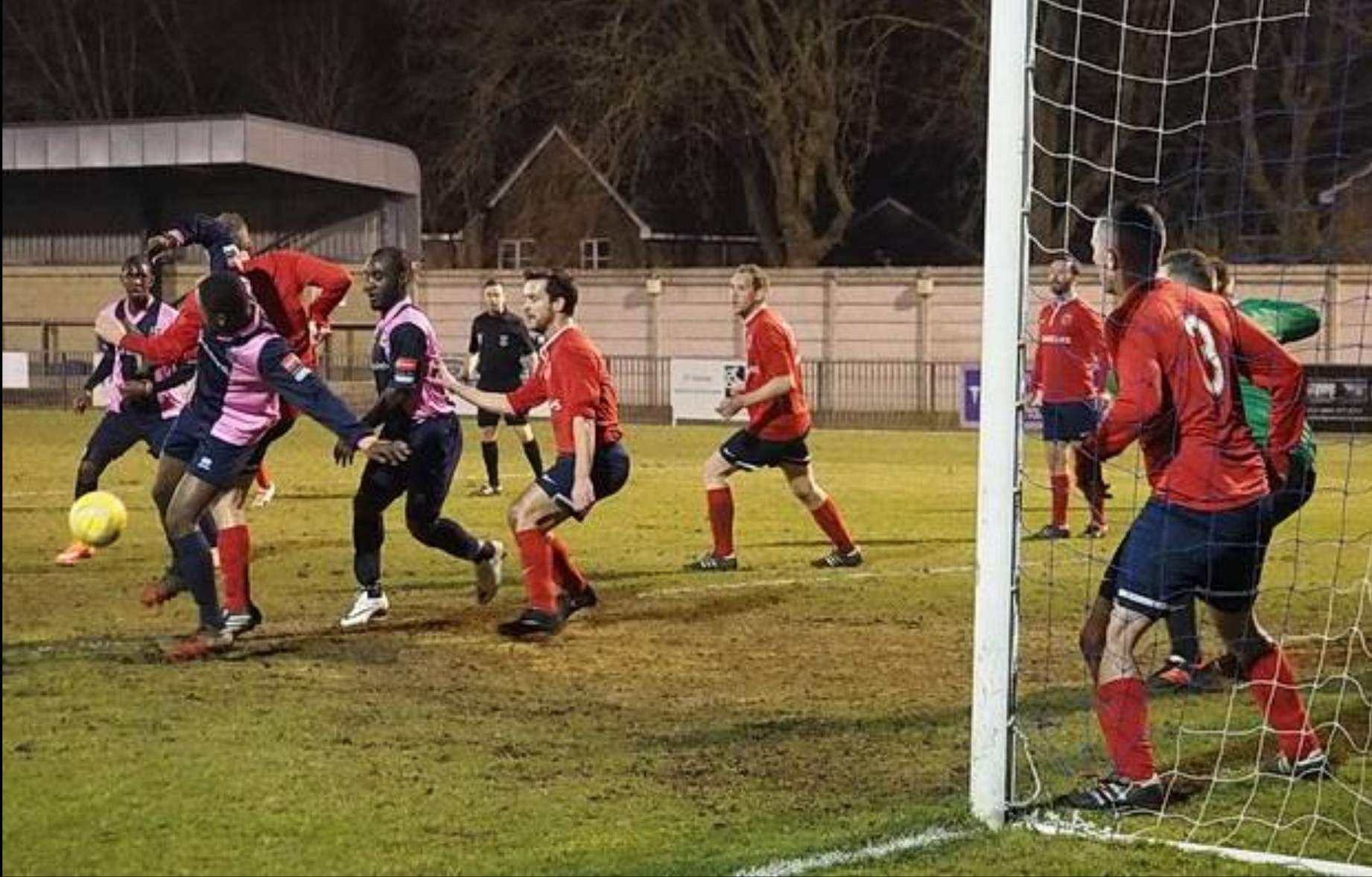 Stonewall kept up the fight, but a fifth Dulwich goal from Kameiko Pope-Campbell made things worse for them, and Dulwich sealed the visitors’ fate with an 89th minute strike from Osman Proni. At the final whistle Dulwich Hamlet celebrated a 6-0 victory, with two goals apiece to Dean McDonald and Mu Maan. However, the disparity between the teams had little impact on the atmosphere, with warm and boisterous support coming from supporters of both teams throughout, and a conga line from Hamlet fans circling the pitch and summing up the delighted mood at the Hill.

Football can still, sadly, be a daunting and even hostile landscape for LGBTQ+ fans, particularly those who are new to the game - from the well-meaning but sometimes slow-moving non-league culture and the casual homophobia still found at live games up and down the pyramid, to the flood of ugly trolling and abuse that pollutes online football discussion on social media. It’s no secret that there are no out male footballers currently playing in the UK, and only a handful who have come out publicly after retirement LGBTQ+ visibility is much greater in women’s football, but that in itself can become a stereotype that is weaponised against the women’s game by bigots and trolls.

If LGBTQ+ fans are to feel welcome and wanted in football, it’s not enough to condemn homophobia. The DHFC vs Stonewall FC match showed how clubs can turn talk into action, create a shared space for players and fans of every gender and orientation, and start to build a culture that is not just safe but infused with the joy and pride that the beautiful game should bring to football fans everywhere - whichever team they play for.

Copa90’s short film about the match